OXYHEMOGLOBIN METHOD FOR ESTIMATION OF HEMOGLOBIN 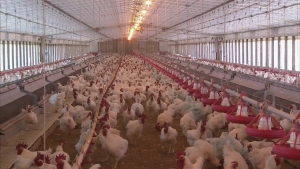 INTRODUCTION TO POULTRY
Rearing a variety of birds such as chicks, turkeys and ducks is referred to as poultry. Chicken forms the major poultry farming all over the world.
In Pakistan the poultry sector is playing an important role in bridging the gap between the supply and demand for protein. Commercial poultry farming started in Pakistan in the early 1960s and showed rapid growth over the decades. The early growth of this sector was the result of the promotional policies from the Government and the persistency of the poultry farming community. The Government considered the poultry production chain to be a crucial part of the food processing industry and gave special incentives to this sector, and hence the poultry sector was declared free of sales and income tax as well as exempt from import duties for a number of years. As a result, during the early 1970s, the sector saw 20–30% growth per annum, and continued to grow at a rate of 10–15% in the 1980s. The most important reason for this growth was a vibrant domestic market, due to which poultry meat consumption increased more than 4% per year.
In Pakistan, poultry production is one of the most dynamic and well organised sectors contributing 26.8%, 5.76% and 1.26% respectively to total meat production, agricultural sector and overall GDP. In the last few years, the poultry sector has shown excellent growth and has emerged as a source of employment for more than 1.5 million people (GOP, 2014).
The extraordinary progress of poultry farming in Pakistan is due to the following reasons.
The domestic fowl is allowed to move freely in open places in villages. These birds freely move and lay a few number of eggs. This is the only system normally practiced for growing chicks in villages for a longtime. However, this method is not proved to be economical. As an alternative to this, poultry farming is initiated.
POULTRY FARMING METHODS
Some important aspects are to be followed in poultry farming. They are (1) poultry housing and equipment (2) management of chicks - broilers and layers (3) poultry diseases (4) poultry products, marketing and economics. In poultry farming, the birds may be grown either by the semi intensive system or intensive system.
SEMI – INTENSIVE POULTRY FARMING SYSTEM
This system is adopted where the free space available is limited. A space of 20-30 square yards is to be allowed per each bird of outside run. Some times the birds may be allowed to move onto fresh ground.
POULTRY FARMING - INTENSIVE SYSTEM
In this method, proper care is to be taken to grow the chicken.
The intensive system is the common system employed in poultry farms. In this system, birds are grown freely in houses or cages arranged in tiers. Housing is meant for providing ideal conditions for the chicken so as to give efficient production.
Read more...
Monday, 12 June 2017 18:54 CRE may be spreading more widely than previously thought One family of superbugs, known as carbapenem-resistant Enterobacteriaceae or CRE, may be spreading more widely than previously thought, according to a study published Monday in the journal Proceedings of the National Academy of Sciences. In fact, transmission of these bacteria person-to-person may be occurring without symptoms, say the researchers, from the Harvard T.H. Chan School of Public Health and the Broad Institute. CRE, which tend to spread in hospitals and long-term care facilities, cause an estimated 9,300 infections and 600 deaths each year in the United States, according to the Centers for Disease Control and Prevention. Test Procedure
1. Use a sterile loop or needle to inoculate broth tubes with different salt concentrations.
2. Incubate at the optimum temperature for 48-96 hours. Objective: To test the organism's susceptibility to antibiotic penicillin.

The discovery of penicillin's antibiotic powers is attributed to Alexander Fleming. The story goes that he returned to his laboratory one day in September 1928 to find a Petri dish containing Staphylococcus bacteria with its lid removed.

The dish had become contaminated by blue-green mold. He noted that there was a clear ring surrounding the mold where the bacteria had been inhibited from growing.

This discovery of the mold - Penicillium notatum - and his recognition of its special powers set the wheels in motion to create one of the most used drugs in medical history.

In March 1942, Anne Miller became the first civilian to be treated successfully with penicillin having almost died from a huge infection following a miscarriage.

Although Fleming often gets the accolade for having invented the first antibiotic, there was a lot of work to do before penicillin could become as commonly used and useful as it is today.

The bulk of the work was eventually carried out by scientists who had a much better-stocked laboratory and a deeper understanding of chemistry than Fleming. Dr. Howard Florey, Dr. Norman Heatley, and Dr. Ernst Chain carried out the first in-depth and focused studies.

Interestingly, and with impressive foresight, Fleming's Nobel Prize acceptance speech warned that the overuse of penicillin might, one day, lead to bacterial resistance. Test Procedure
1. Inoculate 5 ml of BHI broth with your unknown organism and incubate overnight. We have found that broth cultures provide much more accurate results than using inoculum from a plate. However, if you are inoculating from a plate, make sure you use a very light inoculum.
2. Obtain a thioglycollate tube and make sure that it does not have more than 20% of the medium in pink color. This may happen due to oxidation of the top layer of the medium. To restore anaerobic conditions, such a tube should be placed in boiling water for 10 minutes and then cooled to room temperature. If you do not see any pink color against a white background, the tube is good to use.
3. Use a sterile narrow thin needle (rather than a thick one), insert into your culture broth and slowly stab a thioglycollate tube to the bottom. Carefully remove the needle along the same stab line. Do not shake the tube or move the needle around, or you will introduce extra oxygen into the medium. The needle should reach all the way to the bottom of the tube.
4. Incubate the tube at 30°C (without any regard to the optimum temperature requirement of your species) for 24 hours before reading the tube.

• Interpretation
-- Aerobe: band of growth on the top of the tube. Some species have a tendency to grow very rapidly in thioglycollate tube so that the growth covers a rather thick band from the top and extends to the line of stab where there is oxygen available (brought in by the needle). So it is best to look at the bottom 1-cm of the tube and if it is clear with no growth whatsoever, then you can be sure that you have an aerobe.
-- Microaerophile: band of no growth at the top, then a band of growth extending a short distance down proceeded by no growth to the bottom. The bottom 3-cm of the tube should be clear of any growth.
-- Facultative Anaerobe: growth can occur either throughout the tube or can begin at some point below the surface and extend all the way to the bottom, even in the 1-cm bottom of the tube.
-- Anaerobe: growth only at the bottom fifth of the tube. Objective: To determine the presence of the oxidase enzymes (e.g. cytochrome c oxidase).

Test Procedure and Interpretation
1. Grow the culture on a BHI plate for 48 hours. Up to 7 day old cultures are fine.
2. Warm the plate to 20-37°C. Pick a good amount of the test organism with a sterile swab and rub onto the reaction area of a DrySlide card. If the organism is oxidase positive, a purple color will develop on the slide within 20 seconds. The slide is saturated with Kovacs' oxidase reagent (1% N, N, N', N' tetra-methyl-p-phenylene diamine dihydrochloride). Oxidase negative colonies do not change the color of the slide in 20 seconds, or if they do, it would be after 20 seconds and thus negative.

• Precautions
-- Most Gram-positive bacteria and all Enterobacteriaceae are oxidase negative.
-- Do not attempt to perform an oxidase test on any colonies growing on media containing glucose, as glucose fermentation will inhibit oxidase enzyme activity, and result in possible false negatives. Oxidase test on Gram-negative rods should be performed only on colonies from nonselective and/or non-differential media to ensure valid results.
-- The culture should not be older than a week, unless the species is a slowgrower. False results may be obtained if the culture is old.
-- The oxidase reagent quickly auto-oxidizes (by free oxygen in the air) and loses its sensitivity. The reagent should be discarded if any precipitate forms. Avoid undue exposure of the reagent to light. The reagent must be made up fresh each week.
-- Time period for color development must be adhered to since a purpleblack color may develop later due to auto-oxidation of reagent and/or a weak positive oxidase organism containing a small quantity of cytochrome c oxidase.
-- As an alternative to Kovacs' reagent, one may use a few drops of a 1:1 mixture of 1% α−naphthol in 95% ethanol and freshly prepared 1% aqueous dimethyl-p-phenylenediamine oxalate.